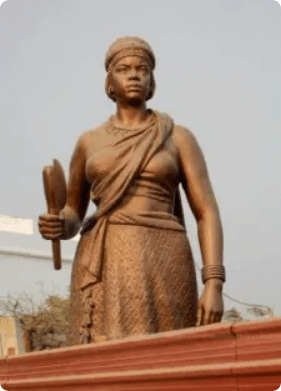 There is a source of strength, intelligence, and unequivocal perseverance that African women and their sisters throughout the diaspora have historically displayed. Whether considering those who led nations, revolts, movements, or other enterprises, women of African descent has and continues to achieve the extraordinary. Queen Nzinga, the 17th century ruler of Angola who led a 30-year war against Portuguese encroachment is one example of the powerful women from which present-day Black women descend. During Queen Nzinga’s reign of resistance against enslavement and colonization she orchestrated political alliances and gorilla attacks that became legendary. Exceptionally skilled in wielding the battle-ax, Queen Nzinga led her army into battle until she was well into her sixties.
As we witness what appears to be a rise in the number of Black women leading nations, movements, businesses, and more, let us remember their vibrant lineage. Becoming more familiar with the historic triumphs of women of African descent can help shift experiences of surprise associated with their present-day achievements, to expectation. After all, they are recipients of a mighty inheritance.
To learn more about Queen Nzinga, and why we can expect Black women to win, click here.