Nowadays, when people think of lion king, a popular Disney story about a young lion coming of age usually comes to mind. However, the great Sundiata Keita, founding ruler of 13th century Mali, was well known and documented as the Lion King centuries ago. Born severely crippled, the young Malinke boy overcame great physical challenges to become a wise, courageous, warrior king who founded what would become one of Africa’s greatest kingdoms.

While the epic story of Sundiata Keita’s rise to power is well celebrated, less known is that he began his reign issuing a charter that outlined the social and political rules by which the united kingdom would operate. Formulated in cooperation with an assembly of nobles, the Manden Charter oral decree set forth clear priorities and guidelines that encouraged social peace, food security, freedom of expression, and other practices that supported national solidarity.

To learn more about the extraordinary founder of the Mali empire, who created and governed according to one of the world’s earliest national charters, click below. 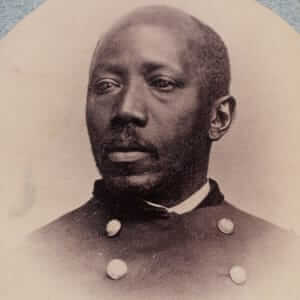 Among the many constellations of Black heroes who championed 19th century Black uplift is the luminary Martin Robison Delany. Born in 1812 to an enslaved father and a free mother who was literate, Delany learned early how to read and write. Both maternal and paternal grandparents were born in Africa, one grandmother descending from the great Malinke people of Mali. Informed of and connected with his African ancestry, Delany grew up to become one of the greatest 19th century champions of African pride.
Delany’s 1879 publication “The Origin Of Races and Color” boldly asserted the primacy of African people as the first humans, God-Kings, builders of pyramids, and otherwise monumental contributors to world civilization. His daring treatise
was, at that time, a bombshell, grossly at odds with conventional racist literature. It reflected a man deeply informed about, and in love with, his African self. As the famous abolitionist Frederick Douglass once stated, “I thank God for making me a man, but Delany thanks Him for making him a Black man.”
Over the course of his life, Delany was an abolitionist, physician, educator, writer, newspaper editor, and much more. Whether writing to inform and inspire Black communities, leading an emigration expedition to establish an African land-base
for free Blacks, or being commissioned by President Lincoln to serve as Major in the Union army, Martin Delany marshaled his many talents into service for creating safe, prosperous, self-governing Black communities.
Click below to learn more about the extraordinary work of Martin Delany, fueled by deep and abiding Black self-regard. 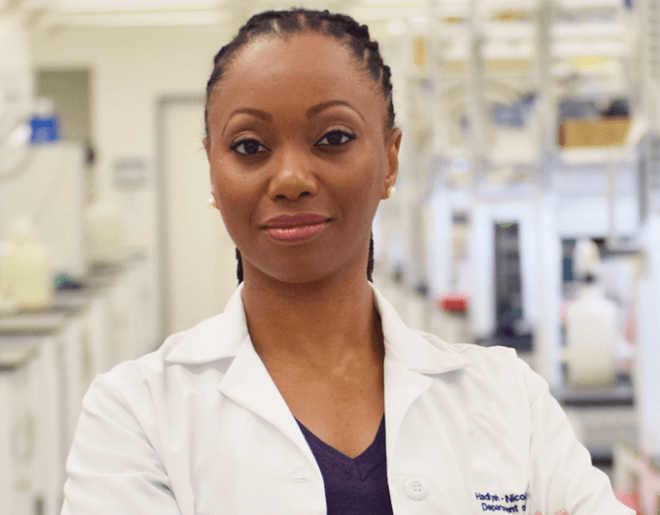 Both the aunt and uncle who raised Dr. Hadiyah-Nicole Green succumbed to cancer. More than a decade later, their deaths continue to serve as a catalyst for the groundbreaking cancer research their niece is leading.
While a physics major in college, Green interned at NASA where she helped calibrate lasers for the International Space Station. That experience informed her decision to make lasers the focus of her graduate studies. Green eventually developed a laser treatment that triggers the destruction of cancer cells in a narrowly targeted area, thereby preserving surrounding healthy cells and tissues. It was after the extraordinary success documented in her work with mice—when almost 100% of the mice that received the laser treatment experienced tumor regression—that Dr. Green launched a foundation to fund human trials. Recognizing the promise of her research, the foundation was awarded a $1.1million grant from the Veterans Affairs Historically Black Colleges and Universities Research Scientist Training Program. Dr. Green continues efforts to raise $10 million needed to complete human trials. 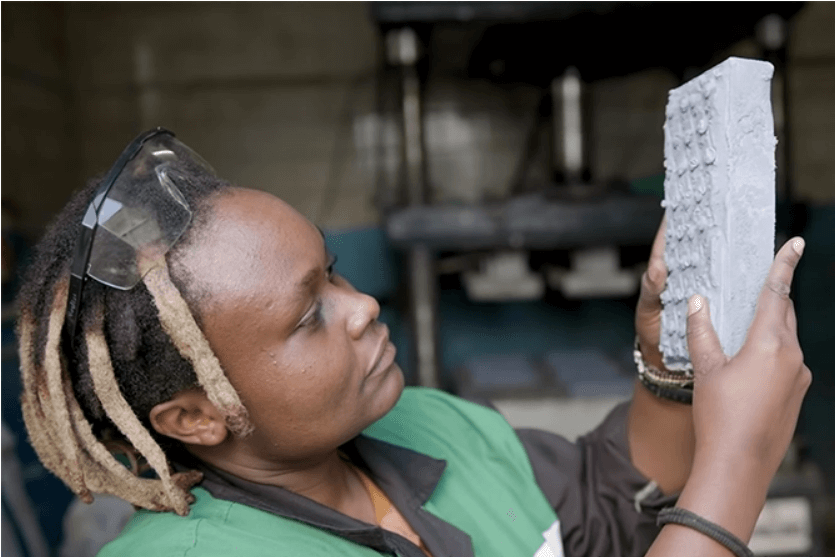 It was watching the debilitating impact of plastic pollution in Kenya that inspired Nzambi Matee to look for remedy. As the materials engineer considered ways that plastic might be recycled, she began experimenting and eventually produced a construction material now used to manufacture bricks. These bricks really
should be called “super bricks.” Not only do they make use of plastic waste that litters streets and contaminates water ways, the bricks have tested 5 to 7 times stronger than concrete. Let that amazing fact sink in.
Recognizing the extraordinary implications of Matee’s technology for reducing global pollution, she was honored as a 2020 winner of the Young Champions of the Earth by the United Nations. To learn more about the enterprising work of a creative African engineer, lending her talents to create a better Africa and world,
click below. Embeded in the article you’ll find a video introduction to Matee and the work of her construction materials company. 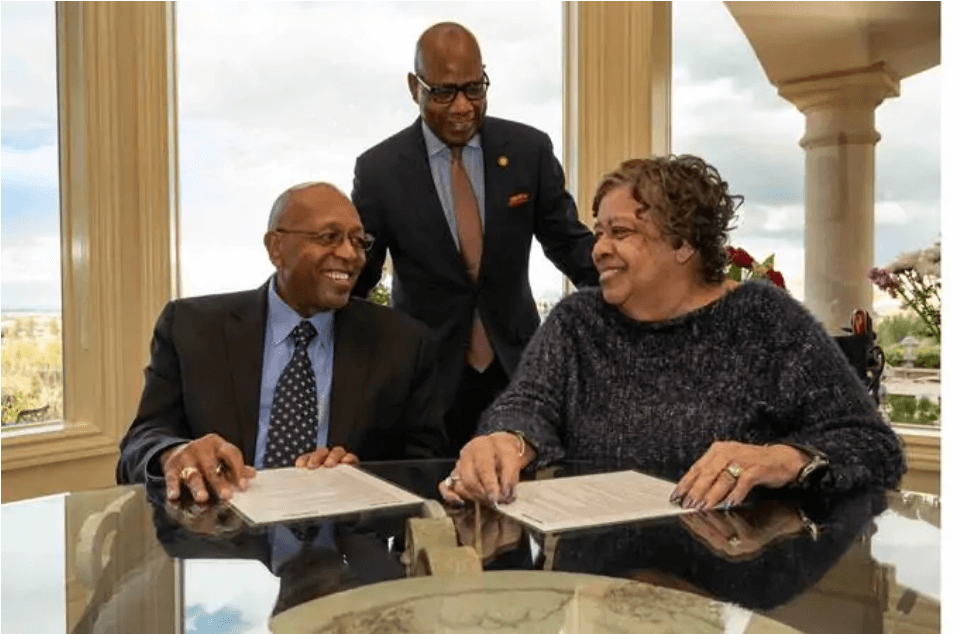 When Calvin and Tina Tyler donated $42,744 to Morgan State University in 2000, they considered their first gift an initial installation toward a total of $500,000 they would give over time. It was their expression of appreciation for the valuable learning experiences the university provided Calvin and so many others. Even though Calvin left Morgan State before graduating, to secure gainful employment, he “wanted to make it possible for a lot of kids from the inner city to go to college on scholarships.” Twenty-one years later, he and Tina are now approaching an incredible $20 million give. With their contributions earmarked to help pay the tuition of students in financial need, the Tyler’s hope their philanthropic example will inspire HBCU students and others to rigorously support Black colleges and universities. 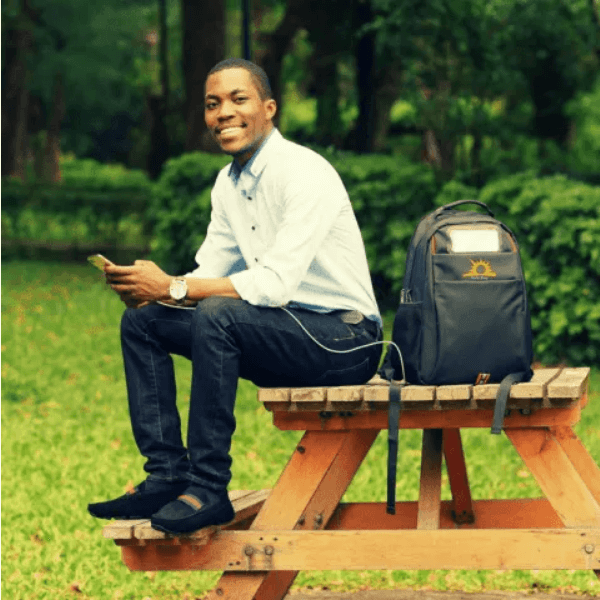 Love for family and country was at the root of Mike Bellot’s efforts to develop a solar powered back pack that provided lighting for readers. Its illuminating function was spawned by the death of Bellot’s cousin who perished after a candle providing his only source of light by which to study caused a house fire. Knowing that electricity is available to less than 40% of Haiti’s population, Bellot—who was in Taiwan studying for a master’s degree when his cousin died—directed his attention to designing the Solo backpack.
Launched in 2018, the innovative backpack has been lighting the way for many in Haiti as a source of safe, no-cost, portable energy. To learn more about the creative efforts of a young Black entrepreneur who turned tragedy into triumph,
click below. 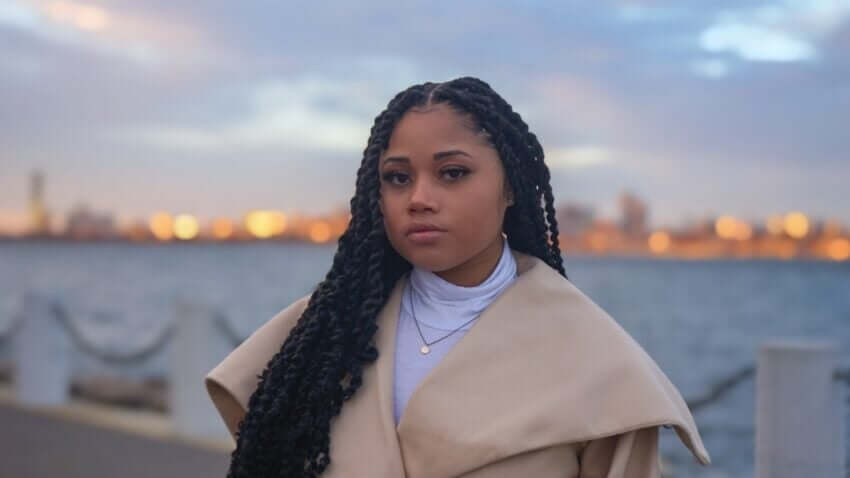 In the midst of the growing social justice movement, Toiell Washington noticed how difficult it was for many people to understand and talk about racism. The 23-year-old community organizer and senior at Salem State University wanted to join growing efforts to address racial oppression and other forms of subjugation. With that intention in mind, Washington recalled when, as a child, math seemed like a difficult subject until she discovered on-line math games. She experienced how learning difficult subjects became easier when the teaching method involved play. That background helped Washington decide to create games that reveal how oppressive mechanisms of control functioned, so Black people and others could learn how to avoid them. Her company “Master’s Tools” was recently launched, making available “Meet the Colonizers,” a card game that teaches players about colonization.
To purchase the game, or learn more about Washington’s ingenious efforts to help inform and avoid subjugation, click below.