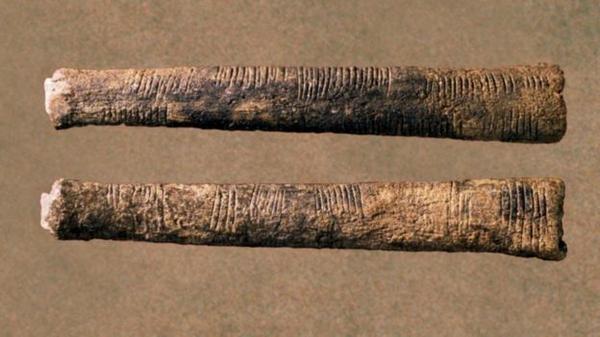 A bone with carved line—simple in appearance, but fascinating in significance—begins to reveal the early mathematical brilliance of Sub-Saharan Africans 25,000 years ago. The Ishango Bone, one of the world’s oldest mathematical devices, was found in the mountainous Lake Edward region, bordering Uganda and the Democratic Republic of the Congo. Its asymmetrical notches suggest that it may have been used to construct a number system. It is also suspected to represent a six-month lunar calendar.
The 1950 finding of this important artifact supports the understanding that African innovations were not confined to Ancient Egypt, the Ghana Empire or other noted African civilizations. Found years after the Ishango Bone, and determined to be 10,000 years older, is the Lembobo Bone from eSwatini (formerly Swaziland). It further indicates that African people, over wide and varied areas throughout the continent, developed specialized areas of knowledge. Click below to learn more about the Ishango bone as one of the earliest indicators of African mathematical intellect. 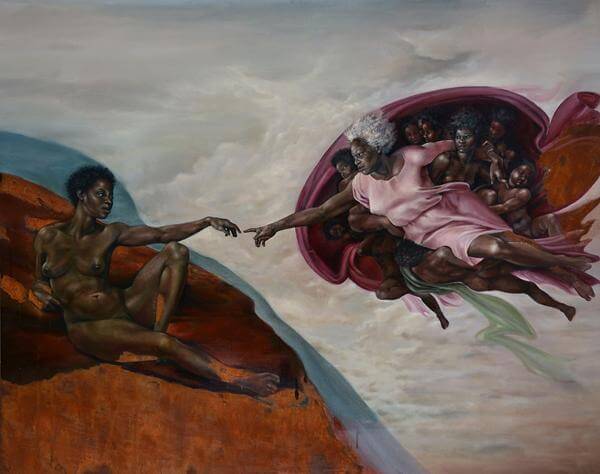 Imagine that! Having the nerve, courage, wisdom or manic tendencies—however you choose to consider the act—to depict God as a Black Woman. Harmonia Rosales, a young Afro-Cuban artist whose paintings are visually breathtaking, has knocked the air out of many who never considered the possibility of God being both Black and a woman. Perhaps that is what makes her work essential and emancipating. At once blasphemous and brutally brave. Rosales has brilliantly gift-wrapped a notion that offends as much as it opens minds to an uncharted way of thinking. Its propensity to open may be what makes the depiction priceless.
Not that simply portraying novel ideas or depicting what seems unreasonable or even outrageous is always a good thing. It isn’t. However, illustrating God as a Black woman presents an opportunity to look, investigate, and determine for one’s self whether or not the newly rendered has value. The responsibility to activate one’s full suite of head, heart, and sensory faculties to discern what is good, right and in keeping with one’s own wellbeing, is called into action. It could serve as a call—as disruptive as it may feel—to a level of self- accountability that requires you to decide what is true and important for you.
Consider Rosales’ work an invitation to mentally flex normal thought patterns in a way that installs Black women inside an ideological sanctuary that stipulates her highest regard. Can’t think of a better time than now to explore Rosales’ work as we enter a holiday season full of religious expressions. Click below to learn and see more. 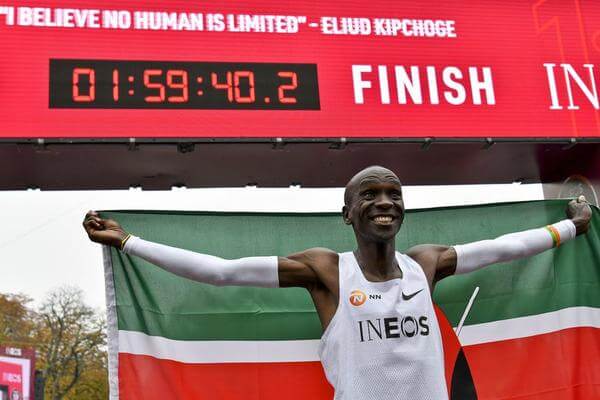 History was recently made in Austria when Eliud Kipchoge from Kenya became the very first person to run a 26.2-mile marathon in under two hours. Finishing the race 20 seconds under the two-hour mark, the 34-year-old did what no other human being has ever done and, until now, was believed able to do. Kipchoge achieved the impossible.
As crowds cheered Kipchoge in Venice, thousands of Kenyans filled the streets to dance and celebrate their national hero. Although runners worldwide acknowledged his fastest-recorded marathon, this achievement won’t be officially recorded as a new world-record, because the run did not take place in an open event. That means Kipchoge’s 2018 official marathon world-record, set in Berlin where he completed the marathon in 2 hours, 1 minute and 39 seconds, still stands. No matter how his performance is considered, officially or unofficially, Eliud Kipchoge is the fastest runner in the world. The WORLD. Click below to learn more. 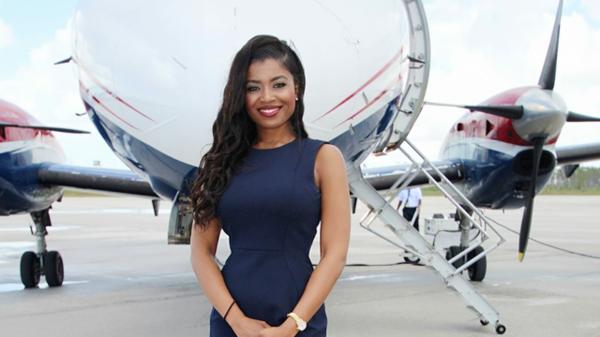 One of the world’s largest Black owned-and-operated airlines has a 30-year-old woman calling the shots. Sherrexcia Rolle is Vice President of Operations at Western Air Limited, a family-owned business based in the Bahamas valued at over $90 million. Founded by her parents—a father who was a pilot and mother who majored in international business—the company was growing when Rolle became involved at a young age.
Since 2001, Western Air has offered flights to and around the Bahamas for Caribbean travelers eager for more convenient options. With Rolle at the helm, the airline is poised to continue to grow and to exemplify what families can build and young Black women can lead when working together. Click below to read more about Rolle’s high-flying success.

A 34-year-old Nashville attorney, Marcus Shute, was repeatedly advised to cut off his locs while matriculating through law school and as a practicing attorney. He was warned that his career advancement could be stalled, that others may not take him seriously, and that overall, his locs would be detrimental to his professional progress. While he recalls being passed over in the workplace and the time a courtroom judge mistook him for a client, Shute has stayed resolute in his commitment to be his own authentic person. 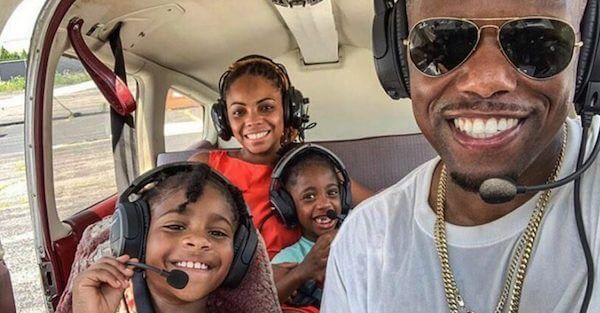 Two North Carolina commercial pilots are offering free aviation lessons through their “Fly For the Culture” non-profit program. Aviators Courtland Savage and Jerome Stanislaus teamed up to expose and orient Black children to career opportunities for qualified pilots. Savage, recalling how strange his desire to become a pilot sometimes felt because, “I never saw a pilot that looked like myself,” wanted to expose Black children to aviation early in their lives. He knew that seeing examples of Black pilots was critical to children forming self-perceptions that accommodated aspirations to fly.
Savage and Stanislaus started the program using their own money. After a local TV news program featured them taking to the skies with delighted children on board, the non-profit began receiving more donations. Now lots of young people are interested and the partners are teaching adults as well. Find out more by clicking below. 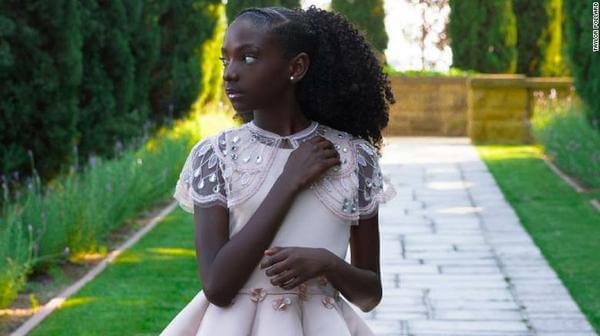 Having previously left one school to avoid complexion bullying, 11-year-old Kheris Rogers was bullied at a second school by more people apparently stricken with an inability to comprehend the depth of her dark-complexioned beauty. Her smart family members went to work, seizing the opportunity to use what first appeared to be a problem, as a stepping stone to Rogers loving her beautiful skin tone even more. Her big sister posted photos of the 10-year-old beauty that went viral. Suddenly popular, Rogers—with more family support—designed a t-shirt that boasted the message “Flexin’ In My Complexion.” It too went viral, with help from celebrities like Lupita N’yongo. A clothing line has followed. In addition to Rogers’ presentation at New York Fashion Week, she’s been featured in a Nike ad and appeared on television.
Rogers plans to continue inspiring other young people to not only love, but celebrate, the beautiful color of their skin. Click below to read more details and be reminded to flex.