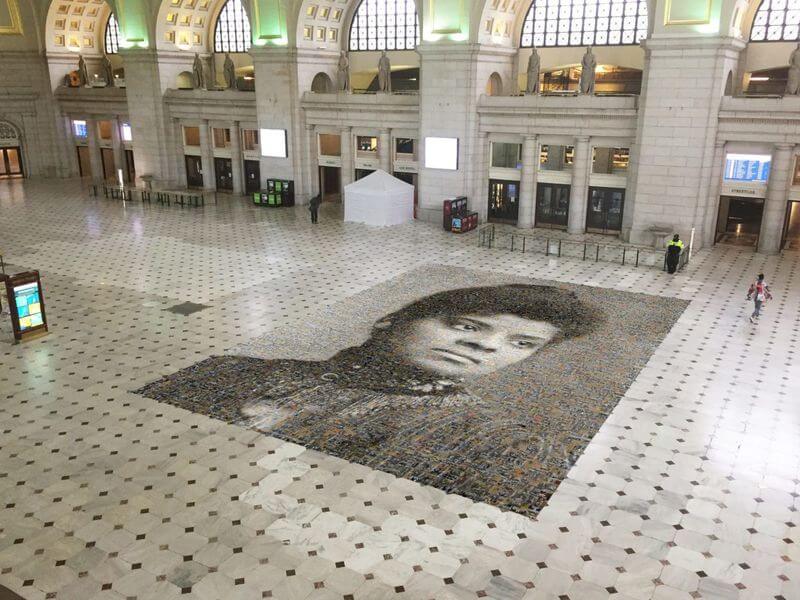 Similar to the way smart phones reveal video evidence of unprovoked police assaults, Ida B. Wells-Barnett revealed lies and deceit used to justify lynchers and lynchings. As a truth telling investigative journalist, she uncovered evidence of murderous routines systematically hidden. Exposing heinous injustices against Black people and working tirelessly for their uplift —including the right to vote—was her life-long focus. That’s why Ida B. Wells-Barnett is a beacon of Black triumph, and the reason we applaud the installation of her 1,000 square foot portrait as public monument.

You will find Wells-Barnett’s massive face of courage inside Washington, DC’s Union Train Station. The mosaic portrait was commissioned by the Women’s Suffrage Centennial Commission to commemorate the 100th anniversary of the 19th Amendment. While the amendment opened voting polls to white women, Black women were subjected to racist practices that subverted their right to vote. August 21, 1920 marked a victory for white women and signaled a new chapter in African American women’s fight for the  vote.

As a spirited soldier who fought on multiple fronts for the dignity and equality of Black people, Wells-Barnett’s life provides a playbook for cultivating family, fearlessness, and formidable truth. To learn more about the new portrait and public tribute, click here.

To learn more about Wells-Barnett’s bountiful and courageous life, click below to watch a 55 minute biographical documentary that provides valuable ancestral instruction. 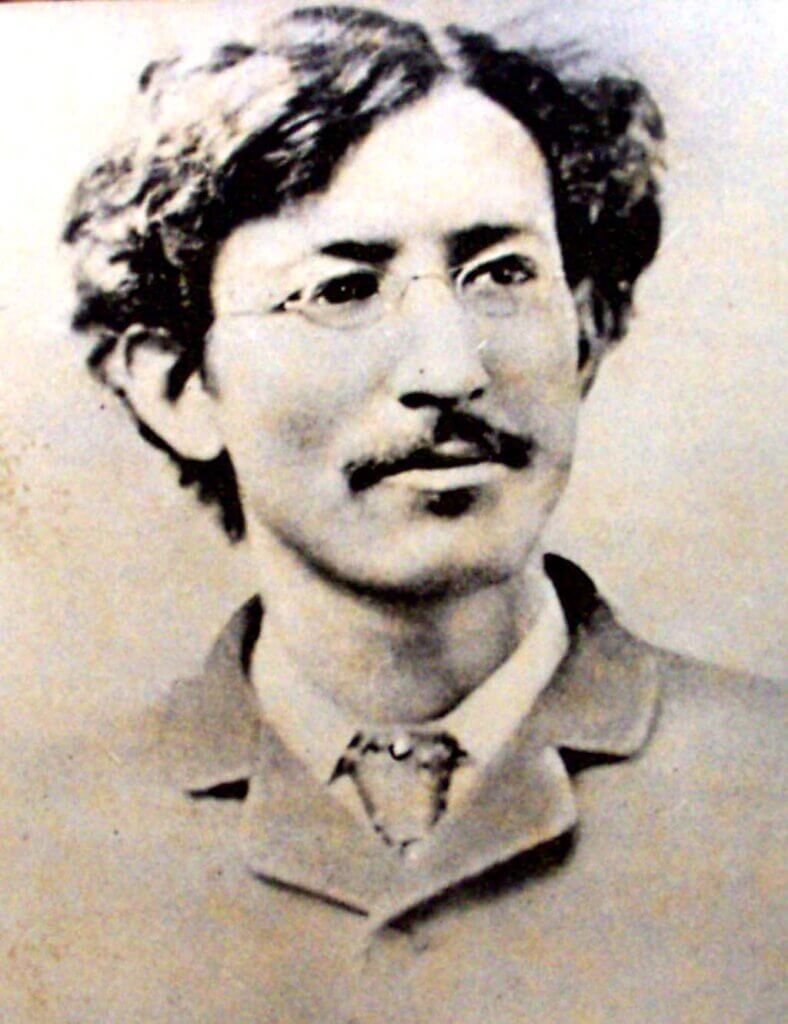 During the late 19th century, when renown activist Ida B. Wells-Barnett began exposing the savagery of lynching, she became a marked women. To elude those who wanted her permanently silenced, she left Memphis Tennessee and headed north. It was in New York City where Wells-Barnett safely relocated and secured immediate employment as a journalist at Timothy Thomas Fortune’s  New York Age newspaper.

Because Fortune—renown journalist, editor, and co-owner of what was then the most influential Black newspaper in the United States—operated a successful press of his own, he could provide Wells-Barnett the level of stability associated with employment. Because he controlled the editorial direction of the newspaper, he could assign value to Wells-Barnett’s perspectives and promote them further. And because Timothy Thomas Fortune became one of the most influential Black publishers of the late 19th and early 20th centuries—including serving as chief editor for Marcus Garvey’s Negro World newspaper—he is a historic figure to know and emulate. Like so many formerly enslaved, Fortune worked tirelessly to build businesses and communities where Black people would be safe, grow, and prosper. Despite personal challenges, Fortune spent his life amplifying Black voices desperately needing to be heard.

Today, his historic example offers a demonstration of how to vision, plan, and build under the most difficult circumstances. Because he did, Black people are provided abiding evidence that they can. Click below and be introduced to the pioneering work of Timothy Thomas Fortune, by-way-of an illustrated comic sequence. Be inspired to learn more.

To The Illustrated Comic Sequence

City First Bank in Washington, DC and Broadway Federal Bank in Los Angeles, California are preparing to merge and create the largest Black-led bank in the United States. Having recently entered into what’s known in the world of business as a Transformational Merger of Equals Agreement, the consolidated institutions will manage $1 billion in combined assets and $850 million depository assets. The union will strengthen their shared focus to serve low and moderate income communities. This merger is especially significant given that Broadway Federal recently thwarted a hostile takeover attempt by The Capital Corps that would have ended Broadway’s 70 years of ownership.

If you’ve watched or listened to reports about social unrest in Chicago sparked by the George Floyd police killing, you’ve likely been informed of Black youth participation. Did any of those reports mention how Black teens turned a looted liquor store into a food pop-up market? Were you informed of how members of the Young West Siders envisioned better for their community and decided to create the Austin Harvest Market as a fresh food resource? Did you learn how—in the midst of a neighborhood food desert—Black youth built a produce oasis in only 2 months? With financial support from former Chicago Bears linebacker Sam Acho and other Chicago athletes, industrious young folks rolled up their sleeves, went to work, and improved the neighborhood they call home. They’ve turned adverse circumstances into an advantage.

Let’s ring the bell, sound the alarm, and share this positive news near and far. Because what we think about youth contributes to their behavior, knowing Black Youth in Chicago as sources of remedy can foster more positive actions. Click below and be inspired to acknowledge Black youth for the good things they do. 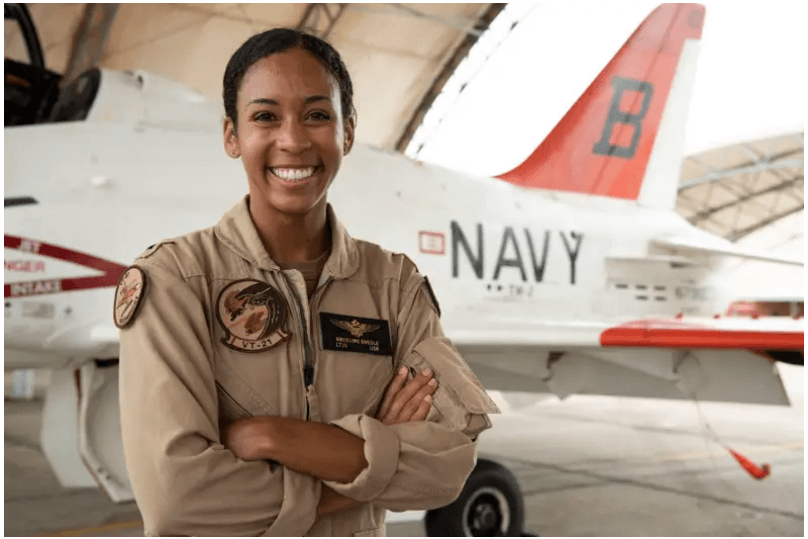 What comes with acknowledging and nurturing Madeline Swegle’s extraordinary abilities is her designation as the US Navy’s first Black female tactical air pilot. Indeed, the Sister is a fighter pilot, trained in tactical maneuvers and conditioned to stay combat ready. Knowing the incredible mind and heart required of any person who becomes a fighter pilot suggests Swegle’s journey through the predominantly white and male military environment forged an exceptionally strong and able Sister soldier. According to Swegle, she never intended to be the first. “It would’ve been nice to see someone who looked like me in this role . . .  I hope it’s encouraging to other people.”

Click below to meet the fighter pilot whose achievement provides evidence of what Black women have, can, and will accomplish. 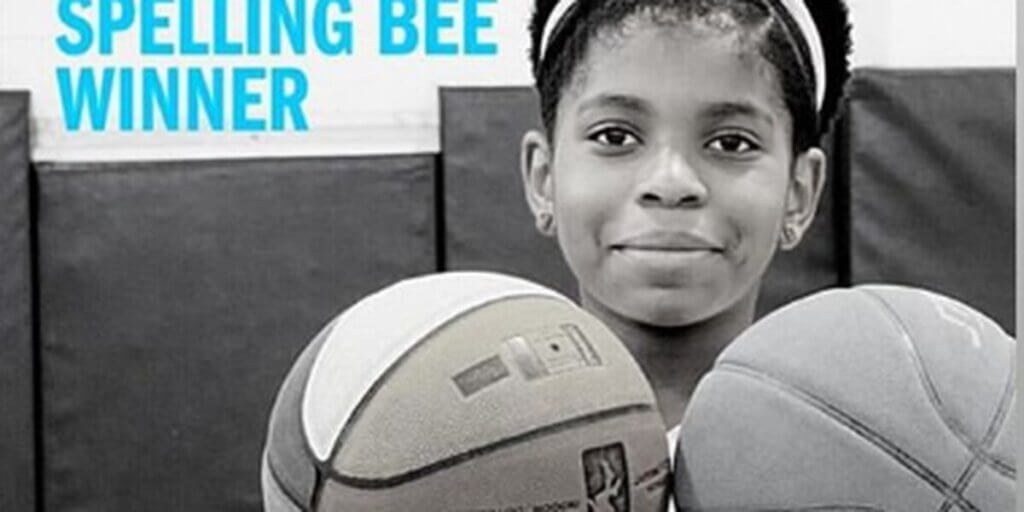 After competing for 6 days, 18 hours, and through 31 rounds of spelling, 13 year-old Zaila Avant-Garde, defeated 88 of the best spellers in the United States to win the national Kaplan Online Spelling Bee. This ambitious teen from Harvey, Louisiana is a winner. Take note that an important part of shaping her champion mindset included studying 5 hours on a typical day.

This is not the first time the Louisiana native has made headlines for winning. Zaila’s love for basketball and desire to play for the Women’s National Basketball Association, inspired her to clinch the Guinness World Record title for most basketball bounce juggles in one minute. Exceptional ball handling skills earned Zaila a performance with the Harlem Globetrotters and an Under Armour cameo with Stephen Curry. A top-notch academic and athlete, Zaila provides a great example of how Black youth can master academic performance AND sports. Click below to read more about the reigning national spelling bee winner every teen girl could benefit from knowing. 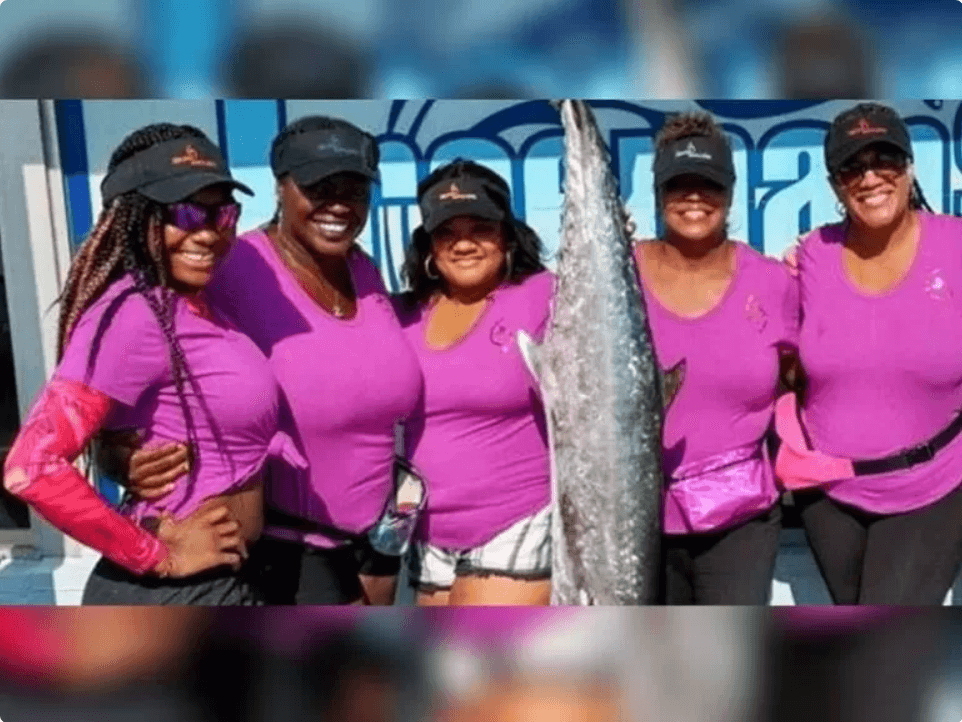 Each day we are provided opportunities to witness and learn more about the expansive range of Black women accomplishments. Thanks to the five women who comprise the Black female fishing team from Morehead, North Carolina, we can add champion fisherwomen to a wide range of amazing distinctions.The Ebony Anglers recently made history after winning in the King Mackerel division of the Spanish Mackerel & Dolphin Tournament. Even though it was their first competitive event, they reeled in a 48 lb. King Mackerel to earn a coveted citation from the North Carolina Wildlife Resources.

What makes this group of mothers, daughters, sisters and wives even more amazing is that they are each business owners. Salon owner Gia Peebles organized the team after watching a fishing tournament where no Black women could be found.  Peebles recalls thinking “I already know accomplished women who are leaders and know how to win in other aspects of their lives. We can do this.” And so they did!

Click below to learn more about the accomplished group of champion fisherwomen, accomplishing even more.