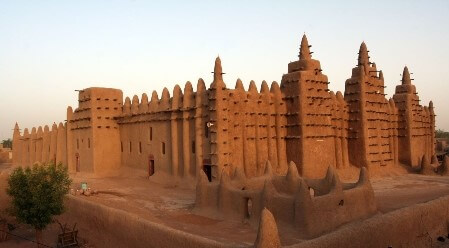 There is a mythical connotation associated with the land of Timbuktu that suggests a place far away, if not fictitious. In reality, Timbuktu is not the fantastical invention of storytellers. It is a city in the West African nation of Mali that was once the learning center of the world.

Named after “Buktu,” a Tuareg woman who offered fresh water and a place to rest for travelers in an area near the noted city, Timbuktu began to distinguish itself in the 11th century. Situated along a trade route to Mecca, the location grew into a notable marketplace that attracted many people, including Muslim scholars who shared Islamic teachings that were widely disseminated. The continued growth of Timbuktu was bolstered when Mali’s wealthiest ruler, Mansa Musa, visited the city in the 13th century. He built a royal palace and what was then the largest house of worship in West Africa. The great Jingarey Ber mosque still stands.

At the height of its development, Timbuktu was home to more than 150 schools and Sankore University. Its educational network served more than 25,000 students and taught a variety of subjects, including medicine, agriculture, astrology and more. Some 700,000 Timbuktu books and manuscripts are accounted for today, and a greater number suspected to have been produced.

Click here to learn more about the intellectual legacy Timbuktu provides people of African descent. Be reminded of the thinkers, learners, and readers from which Black people descend.